Massachusetts passes a COPA-like law, and the law is immediately challenged in federal court

The law was motivated by an incident where someone sent an explicit message to a 13 year old girl. But plaintiffs, in a federal suit, say that the law is worded way too broadly, much like COPA, to include posting of all “harmful to minors” materials on the Internet. Plaintiffs say that this could even apply to discussions of contraception, abortion or gay sex.

The Commonwealth disagrees, saying that the law applies only to messages sent to specific people known or reasonably believed to be minors.

I've never learend the final disposition of similar laws in Virginia and New Mexico, which, as far as I know, have never been enforced.  (Virginia's was before te Virginia Supreme Court).

But it’s likely that the case will refer to the 2007 COPA decision in Philadelphia.

The story was run today on p A5 of the Washington Times.

Picture:  no, not Boston; downtown Philly, from the train, where the COPA trial was held in 2006. Sorry about the tilt.
Posted by Bill Boushka at 11:46 AM No comments: 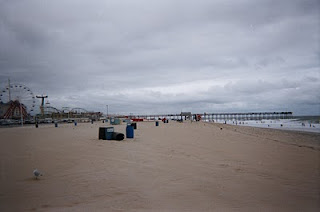 Dr. Phil appeared on AC360 tonight (Oct 6), talking about the dangers of cyberbullying, partly because they don’t look the victim in the eye. This is a video everyone should see. The basic link is here.

Dr. Phil’s appearance came after Anderson described a case in Florida where a 13 year old girl sent an inappropriate image of herself after prodding from a boyfriend, and it was sent to six schools. Eventually, after the bullying, which the school system dropped the ball on, she took her own life. Later people even wrote bad things on her family’s memorial Myspace page.

Posted by Bill Boushka at 8:01 PM No comments: