COPA: I took it to Cato 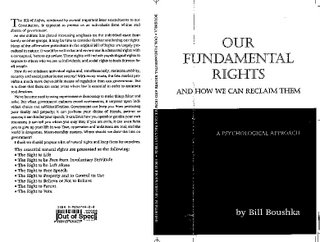 I took the COPA show to a Cato Book Forum today, in the Fortress of Solitude, that crystal building (looks like a model of an ionic bond in a high school chemistry science fair project) on Massachusetts Ave in Washington DC, not far from where the Cirque du Soleil was setting up.

The occasion was a debate and book signing party for law professor (Florida International University) professor Elizabeth Price Foley, and her new book from Yale University Press, "Liberty for All: Reclaiming Individual Privacy in a New Era of Public Morality." Her basic thesis was that individual rights, including the free speech rights at issue in COPA, probably were applicable to the states as well as the federal government because of the Ninth Amendment and the way it can be read in terms of "individual sovereignty" despite the refusal of courts to recognize such in the early ninetheetn century over secession fears. The Penumbra clause would have supported the concept of unenumerated fundamental rights.

Now most states have their version of COPA, expanded from their own "harmful to minors" laws, and some of these have been struck down. Virginia passed its version of COPA in 1999, and it was struck down at the appeal level because of the lack of specificity as to what "commercial" means. My understanding is that it is still on appeal by the Commonwealth before the Virginia Supreme Court in Richmond, and the outcome is likely to depend on what happens in this trial.

The author was quite clear that the law should, even under a paradigm of the Harm Principle, protect minors, because by definition minors are not legally "competent." Of course, in all of the debates over the Third Prong, we have wondered about the differences between the mature minor, the average minor, and so on. From my own sub teaching experiences, I've noticed that teens who perform in public at anything (music, orchestra, piano, drama) seem to be a lot more mature in interpreting cultural distractions than others.

But I came back and asked her, from the audience floor, my question about Who Picks Up the Tab. It is, after all, primarily the responsibility of parents to protect their kids, and only parents know how mature their kids are. Many families seem just fine with dealing with the cultural pluralism out in the real world, in the media and on the Internet, and can deal with it properly--whether the filters or content labels work perfectly or not. But some parents obviously can't, because of lack of education, or economic disadvantage. When do I, as a speaker, have to "Be My Brother's Keeper."

That was my question from the floor. The answer was the usual one, that the government would have to find the least restrictive means possible. The moral question, though, is: I was raised and was protected when I was immature, so what do I owe back to the next generation? That seems to fit in to the broadest libertarian sense of personal responsibility, but it just seems outside the law the way we can apply it. The same question also came up at lunch Monday at the Philly Cheese Steak diner. But if there were ever a prosecution of a relatively "non corporate individual" and a singleton like me, this is what a jury would feel.

The Nerve blog, updated every day from the trial, is this.
Posted by Bill Boushka at 5:38 PM