The Internet Content Rating Association (http://www.icra.org) has a more sophisticated system. It appears to be headquartered in London (UK), to operate worldwide, but to be very small given the ambition level of its product.

The webmaster fills out questionnaires and templates about aspects of the site's content. The system generates Record Descriptors -- am RDF (or XML file) that is to be inserted in the site's root directory. This file has pointers to all the different content level combinations. Then each file (usually the HTML header) must contain LINK statement to point to the correct combination on the root directory RDF. The philosophy follows that of the "semantic web" of W3C.

For a site to be certified, every file has to be labeled. Images can be labeled with digital watermarks, but there seem to be issues with some file types (like PDF's) that would necessitate more vendor development. It may be easier to properly label a site with a content management system, or with content generated from style sheets (especially XSL, which might limit readability to Internet Explorer). There are many issues to explore here, and I will try to give more details as I can develop them.
Posted by Bill Boushka at 10:17 AM No comments:

Safesurf.com has a simple system for labeling individual files, with similar capabilities for parents to place hooks into browsers.

I have labeled my own doaskdotell.com home page and some other files with Safesurf and set up the Content under Internet Options in Internet Explorer (when logged on to AOL), and I have found that subordinate directories are blocked by the Safesurf labels.

You can check a site or webpage or any directory within a site by going to
http://www.safesurf.com/inspect
Posted by Bill Boushka at 8:39 AM No comments: 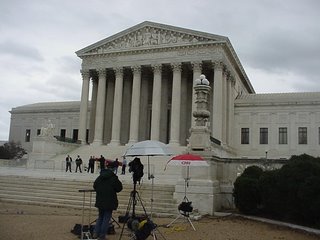 I think that the most promising approach is content labeling. A content labeling software company sets up label coding conventions to identify various content issues (such as pornography, violence, drugs, psychological stress), possibly refined by age categories. These are set up as entries to code in the HTML header. They might be META tags, or they might be LINK statements to point to an XML (or RDF) file in the domain’s root directory. The labeling company may or may not require that all files on a domain be labeled.

You wind up with a system conceptually similar to movie ratings, but with much more refinement and a large combinations of possible masks. The browser software must know how to read these tags, so the browser vendors and labeling vendors must work together. The parent sets up the browser on the machine to allow various kinds of labels. It would seem that this concept could be refined further by logon account (for each child) by an administrator (as with the Windows XP systems or future Vista systems), but more refinement may be needed in some operating systems and labeling systems for all of this to work.

Currently, HTML files and most dynamic content can be labeled, and images can be labeled with digital watermarks. At present, there seem to be issues with PDF files, but that could change in the future.

Public policy and legislation could set standards for browsers to recognize content labels, and could require webmasters to use them for a broader variety of issues than would COPA. Of course, a lot of us don't like to encourage more lawmaking or regulation; but we fear that without implementing an effective technological solution to problems like this, eventually political pressures could end low cost or free entry for many speakers.

Content labeling could have other important uses in the future. For example, a file could be labeled as fiction or non-fiction, so, for example, if an author posts a screenplay script on the Internet, visitors have a way of knowing that the characters and situations are fictitious (a kind of disclaimer that could have legal significance). Academic content for public schools could be labeled as appropriate for various grade levels or various categories of parental content approval.
Posted by Bill Boushka at 5:32 PM No comments:

There is a lot written about content filters offered by major ISPs.
AOL will allow separate levels for different screennames with different passwords on the same master account. Some domains are “blacklisted” for some age categories. For the youngest children, only those domains on a pre-selected “whitelist” can be viewed. For example, when I tried setting up the young teenager account, I found that Yahoo! was blocked but the CNN was allowed. My own domains were allowed when probably they shouldn’t be for some of the age categories. .

Another technique is to use any one of a number of content filters, such as Netnanny, on a kid’s account. Filters work in a similar way with white and black lists, and screen content for inappropriate content. Some filtering companies allow companies to submit themselves to be blacklisted. But tech-saavy kids claim that they get around many of these filters easily.

So filters could function as a kind of software "V-chip" like what is already required for television sets.
Posted by Bill Boushka at 5:21 PM No comments:

The original concept of COPA in 1998 called for webmasters to require visitors to identify themselves with credit cards or adult-id cards. After the litigation over the Communications Decency Act, it had seemed that the use of id cards was preferanle to the idea of banning certain content on the Internet altogther. This turned out quickly to be a naive idea.

There are many deficiencies to this approach. Banks generally issue credit cards only to process financial transactions, not to identify a customer for access to a website. In the age where we are fighting identity theft, it would be risky to encourage webmasters to access credit card numbers and possibly store them, exposing them to hackers.

When I checked into all of this in 1998, adult-ID cards generally were expensive and intended for use with hard-core pornography, not for "good faith" adult subject matter. I am not sure how they work today (2006). Here is one example that I found with a routine search:

Introduction to the problems of Internet censorship

The Internet and world wide web have, since the mid 1990s, opened up a tremendous opportunity for self-expression for people, who can reach a global audience with little barrier to entry. The opportunity, however, has exposed children and minors to content that is potentially harmful to them.

There are several kinds of content that could be harmful. The most often discussed is, obviously, pornography. But also harmful can be excessive violence, weapons, drugs, hate speech, suicide, or other similar materials.

It’s important to understanding that there are layers of interpretation that can make material seem harmful. Pornography is usually objected to in terms of sexually explicit content, such as nudity or specific acts. Child pornography is the most legally objectionable, because its very production violates the legal consent of a minor. Sexuality as a subject matter from an intellectual perspective is generally much more acceptable, but some parents will object to the idea that their children can even these materials posted by attention-seeking adults without supervision. Content might be objectively acceptable but capable of being interpreted as an invitation, enticement or solicitation to others (especially minors) to commit unlawful acts.

Also, there are various kinds of content that raise issues. The most obvious are images and videos, but sometimes text itself raises issues. Content could be posted on personal websites and domains, social networking sites, message boards, user groups, or chat rooms. Content could be shared through peer-to-peer networks.

There have been a number of attempts to protect children with censorship laws. The first major attempt was Communications Decency Act of 1996. Although there were actually some good provisions in the act (such as a safe harbor for ISP’s), the Act would have made it illegal to post obscene or “indecent” materials on the Internet anywhere a child could find it. Indecency generally does not take into consideration the possibility of redeeming social value; matter is indecent by definition (as with the use of the “seven deadly words” or with specific forms of nudity). This portion was struck down by the Supreme Court in 1997. There is a copy of the opinion at http://www.doaskdotell.com/content/cdaopn.htm

An attempt to fix the CDA as the “Son of CDA,” the Child Online Protection Act of 1998, COPA. This law would have made it illegal for a commercial operation to post content that is “harmful to minors,” that is, “obscene with respect to minors,” unless the access is screened by a credit card or adult-id card. I am one of the plaintiffs challenging COPA.

Here is the text of the act: http://www.doaskdotell.com/content/copaact.htm

Here is the major summary of the history of this legislation:
http://www.doaskdotell.com/content/colpa.htm
Posted by Bill Boushka at 3:17 PM 1 comment: